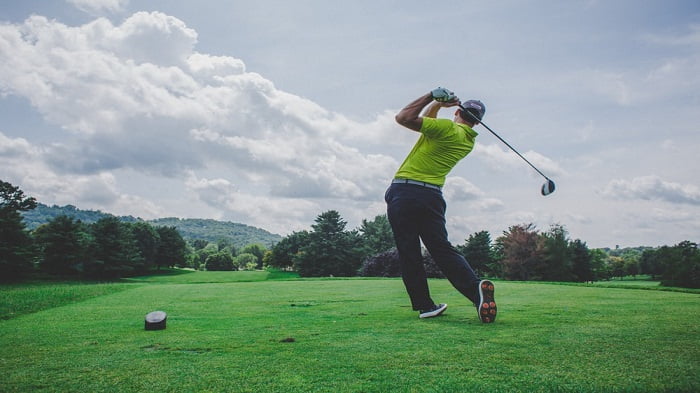 Golf is a club-and-ball sport in which players use various clubs to hit balls into a series of holes on a course in as few strokes as possible.
Golf, unlike most ball games, cannot and does not utilize a standardized playing area, and coping with the varied terrains encountered on different courses is a key part of the game. The game at the usual level is played on a course with an arranged progression of 18 holes, though recreational courses can be smaller, often having nine holes. Each hole on the course must contain a tee box to start from, and a putting green containing the actual hole or cup 4 1⁄4 inches (11 cm) in diameter. There are other standard forms of terrain in between, such as the fairway, rough (long grass), bunkers (or “sand traps”), and various hazards (water, rocks) but each hole on a course is unique in its specific layout and arrangement.
Golf is played for the lowest number of strokes by an individual, known as stroke play, or the lowest score on the most individual holes in a complete round by an individual or team, known as match play. Stroke play is the most commonly seen format at all levels, but most especially at the elite level.
The modern game of golf originated in 15th century Scotland. The 18-hole round was created at the Old Course at St Andrews in 1764. Golf’s first major, and the world’s oldest tournament in existence, is The Open Championship, also known as the British Open, which was first played in 1860 in Ayrshire, Scotland. This is one of the four major championships in men’s professional golf, the other three being played in the United States: The Masters, the U.S. Open, and the PGA Championship.
EUTELSAT-7B @7.0E
Feed Hd Live
Golf
On
TP: 10960 H 7200
SID: 0001
Biss Key : D0 04 A2 76 B4 28 67 43